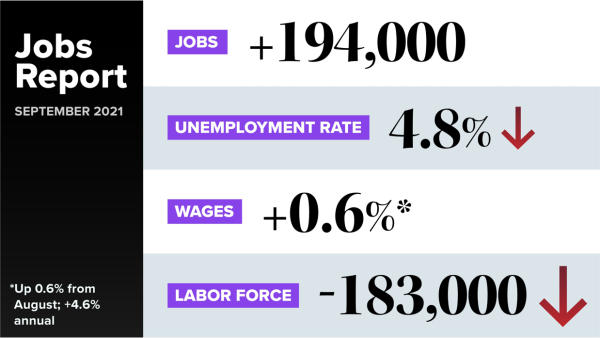 The September jobs report was a huge disappointment. The Bureau of Labor Statistics (BLS) reported the economy added only 194,000 jobs during the month. The consensus estimate was for nearly 500,000.

Why it matters: Job growth has slowed way down. We added 1.1 million jobs in July and 366,000 in August. Those figures were both revised up in this report, so September’s could rise too in subsequent revisions. Jobs in state and local education fell by 160,000. That could be an anomaly with the data that will smooth out in the October numbers given schools reopened more in September than in 2020. However, the overall September figure will likely still be a big miss. With the added jobs, the gap between current employment and the level in February 2020 fell to just under 5 million – still very large.

Details: The unemployment rate fell from 5.2% in August to 4.8% in September, but only because of the drop in the labor force.

Be smart: Perhaps the most concerning aspect of a troubling report is that the labor force declined by 183,000 workers. Workers should be flooding into the labor market as jobs are plentiful and businesses are desperate for workers. That they are going the other way is alarming.