Marrs, 50, will be running her third consecutive Boston Marathon.

An author and local business owner, Marrs finds time to train and race despite the demands of homeschooling her seven children, ages 15, 13, 11, 10, 9, 8 and 5. She is also a member of the Women’s Success Group of Gilbert, a local association of successful female business professionals. Her passion for helping others takes Mrs. Marrs to stages across the country where she shares her message of “faith over fear” while teaching others to become goal getters. Her next big goal after Boston is to bring a 261 Fearless running club to the Phoenix area.

“261 Fearless is the perfect match for me for Boston,” said Marrs. “Not only is it led by one of the most amazing female runners, but its goal and mission is to help educate women about health, physical activity and leadership, build communities and support women to become empowered through running. I know, from personal experience, the power that comes from an encouraging running community. I used to tell people that I could never be a runner and now I have about fifty race medals, including two from the Boston Marathon, which prove otherwise.”

Established in 2015, 261 Fearless Inc. was founded by Kathrine Switzer, who – wearing bib number 261 – became the first woman to officially run the Boston Marathon, in 1967. In 2017, Switzer again finished the marathon to mark the 50th anniversary of her fearless and ground-breaking run. Approximately 30 runners will compete in Boston this year as part of 261 Fearless Team Boston, supported by adidas in raising funds for the organization.

“Bringing the empowerment of running to women around the world begins with a single step, and 261 Fearless Inc. is honored that our Team Boston charity runners have taken that step – and will take many more,” said Switzer.

The global non-profit organization uses running as a vehicle to empower and unite women through the creation of local running clubs, education programs, communication platforms, and social running events. Breaking down the barriers of geography, 261 Fearless Inc. aims to create a global community for women runners of all abilities to support, encourage, and inspire each other toward a positive sense of self and fearlessness. Already, there are more than 50 clubs on five continents, where more than 200 certified 261 Coaches support women to start and continue running.

“We aren’t about speed,” said Edith Zuschmann, CEO of 261 Fearless Inc. “We’re about need: the need for all women to feel empowered through discovery of their own inner strength through being physically active.”

For more information, visit 261fearless.org. To support Marrs, visit runwith261.com or plan to attend her upcoming “Fuel Your Fearless” fundraiser at Thrive Coworking for Women in Gilbert, Arizona on March 27th, from 5-8pm. VIEW EVENT HERE!

***
About adidas Adidas is a global leader in the sporting goods industry with the core brands adidas and Reebok. Headquartered in Herzogenaurach/Germany, the company employs around 57,000 people across the globe and generated sales of € 21 billion in 2017. 261 and 261 Fearless are trademark-protected brands, with registrations in the United? and throughout the world. Any use of these brands without the express written authorization from 261 Fearless, Inc. for each such use is strictly prohibited. 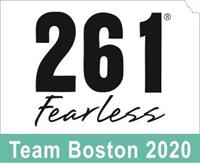