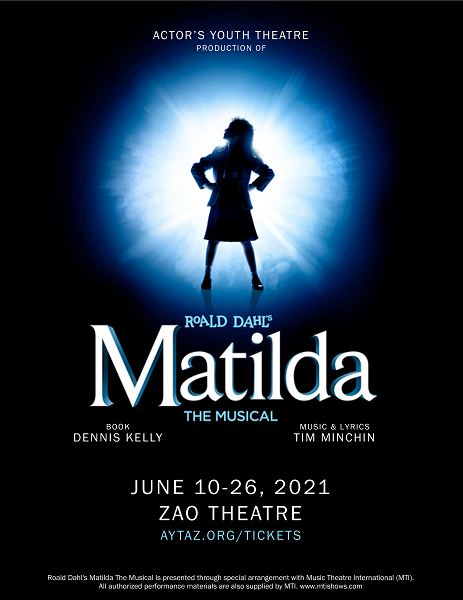 Gilbert, Ariz. – May 26, 2021 – Nearly 40 revolting children from across the East Valley will take the stage this summer in “Matilda The Musical,” the Tony Award-winning show inspired by Roald Dahl that has captivated audiences of all ages worldwide.

Presented by Gilbert’s Actors Youth Theatre in conjunction with Zao Theatre in Apache Junction, the show will run June 10-26 with evening shows on Thursdays, Fridays and Saturdays as well as matinee performances on Saturdays.

“Matilda” tells the story of a little girl with astonishing wit, intelligence and psychokinetic powers. She's unloved by her cruel parents but impresses her schoolteacher, the highly loveable Miss Honey. Over the course of her first term at school, Matilda and Miss Honey develop a powerful bond, but school life isn’t completely smooth sailing: headmistress Miss Trunchbull hates children and loves thinking up new punishments for those who don't abide by her rules.

“I think the relevance of ‘Matilda’ in today’s society is especially poignant. My goal as a director is for the audience to feel the opposition between good vs. evil, acceptance vs. rejection, youth vs. age, and intelligence vs. ignorance,” said Lucy Garner, “Matilda” director. “Through the eyes of a gifted and spunky 5-year-old, we learn that with a little moral courage, good can triumph over evil, and we can be the authors of our own life stories.”

AYT’s production features two casts – Telly and Book – that will take turns performing over the three-week run. It is packed with high-energy dance numbers and more than a dozen songs including beloved favorites like “Revoting Children,” “When I Grow Up” and “Quiet.”

“The show is written from the perspective of the children, so a lot of the elements are larger than life,” said Stephen Hohendorf, artistic director of Actors Youth Theater. “It was imperative that we found actors who could bring these over-the-top characters to life, and we've done just that.”

Another highlight of the show is the set design, which came together over the course of six weeks and hundreds of production hours.

“We have an outstanding set team with Mickey Bryce and Tanja Bauerle,” added Hohendorf. “The set consists of oversized books that seamlessly open and close revealing different settings. The entire proscenium is covered in Scrabble tiles that look like they're falling right out of the bag.”

At the heart of the production are messages of courage, imagination and perseverance in the face of extreme challenges – along with plenty of built-in comic relief.

“I think the reason this show has been so successful is that there's a bit of Matilda in all of us,” Hohendorf said. “She represents anyone who doesn't quite fit in, whether that's in your family, at school or in society. With determination and a little love and encouragement from Miss Honey, she realizes that she just needs to be herself for amazing things to happen.”

“Matilda” is directed by Lucy Garner with choreography by Jessi Schmidt Rodriguez, music direction by Michael Snyder, set design by Mickey Bryce and Tanja Bauerle, costume design by Laura Wanstreet and stage management by Stephanie Coffelt. The show will be performed at Zao Theatre at 550 S. Ironwood Dr. in Apache Junction. Shows are scheduled:


Tickets are $20 in advance/$22 day-of and are available at aytaz.org/tickets or by calling (480) 907-7050. Group discounts are available. Performances are expected to sell out quickly.

ABOUT ACTORS YOUTH THEATRE:
Actors Youth Theatre aims to educate, inspire and grow youth to reach their fullest potential on stage and in life. The organization provides opportunities for people of all ages and backgrounds to develop acting, dancing, and musical talents through comprehensive performing art workshops, community outreach, performance opportunities, and the presentation of theatre productions

ABOUT MATILDA THE MUSICAL:
Inspired by the twisted genius of Roald Dahl, the Tony Award-winning Roald Dahl's Matilda The Musical is the captivating masterpiece from the Royal Shakespeare Company that revels in the anarchy of childhood, the power of imagination and the inspiring story of a girl who dreams of a better life. With book by Dennis Kelly and original songs by Tim Minchin, Matilda has won 47 international awards and continues to thrill sold-out audiences of all ages around the world.